Is it Safe to Use Unsecured WiFi in Hotels?

No, it is not safe to use unsecured WiFi in hotels. Using any public WiFi network presents a risk to your private information and security. There are many threats that you become vulnerable to on unsecured hotel WiFi such as a man-the-middle attack or malware.

Read on to learn more about the risks of using unsecured WiFi in hotels and how you can stay safe if you can’t avoid using it.

Why You Should Avoid Hotel WiFi

When traveling, we often don’t consider the cybersecurity risks that are prevalent in places such as hotels, but using any public WiFi network comes with its risks. Here are some of the many reasons why you should avoid using hotel WiFi.

Anyone can sit in the lobby of a hotel and connect to its WiFi. It’s public access with no security controls so anyone in or near the hotel can access the network and monitor traffic. This means if you connect your device to the hotel’s WiFi, you’re giving the public direct access to it – posing a threat to your personal information and data.

A man-in-the-middle attack (MITM) is a cyberattack where a cybercriminal intercepts data being sent between two businesses or people. During this type of attack, cybercriminals act as “middlemen” between the person who sends the information and the person who receives it. This type of attack is especially common when utilizing public WiFi such as WiFi in hotels since it is often unsecured and anyone can sign on.

How to Stay Safe on Hotel WiFi

Although it’s best to avoid using hotel WiFi, sometimes there’s no other choice but to use it. Here are some security measures you can implement to keep yourself safe while using hotel WiFi.

Virtual private networks (VPN) will allow you to have a secure connection to hotel WiFi that disguises your device’s location and protects sensitive data by hiding it behind dummy information.

When using hotel WiFi, it’s important that you verify every URL before clicking on them, especially if you receive a link from a suspicious email or text message otherwise known as phishing attempts. Phishing is a social engineering attack that aims to convince the victim into revealing sensitive information. Phishing attacks often disguise themselves as emails and text messages from trusted sources. The emails and messages oftentimes contain links that can trigger a malware infection – ultimately leading to your sensitive data being stolen.

Before clicking on any links, you should make sure that the URL contains “https” at the beginning. This verifies that the site you’re clicking on is secure.

Multi-factor authentication (MFA) are various forms of authentication methods that verify your identity before allowing you to log into your accounts. Implementing MFA is extremely beneficial because it ensures that no one can access your accounts until they can verify that they are who they say they are.

Use strong, unique passwords for your accounts

Along with MFA, you should ensure that each of your accounts have strong and unique passwords. An easy way to do this is by using a random password generator to help you generate your strong passwords.

Avoid logging into sensitive accounts while on hotel WiFi

Unsecured WiFi makes it easy for cybercriminals to get their hands on your information, so it’s safest to avoid logging in to any sensitive accounts while using it.

Install and enable a firewall

A firewall is a security device that can be either hardware or software. Firewalls help protect a computer network from unauthorized access by monitoring attempts to gain access to your system and by also blocking any incoming traffic from unrecognized sources.

Firewalls can be extremely useful when using any sort of public WiFi because they can monitor traffic and prevent your sensitive information from being accessed by cybercriminals. 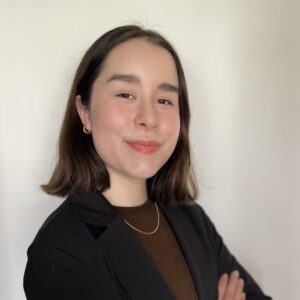 Aranza Trevino is an SEO Content Specialist at Keeper Security. She is an experienced cybersecurity trend and data analyst who continues to gain industry knowledge to educate readers through her blog efforts. Aranza’s blogs aim to help the public and businesses better understand the importance of password management, password security and staying protected against cyberthreats. Aranza studies at DePaul University in Chicago and majors in marketing with a concentration in digital marketing.